Deaerators: The Why and How 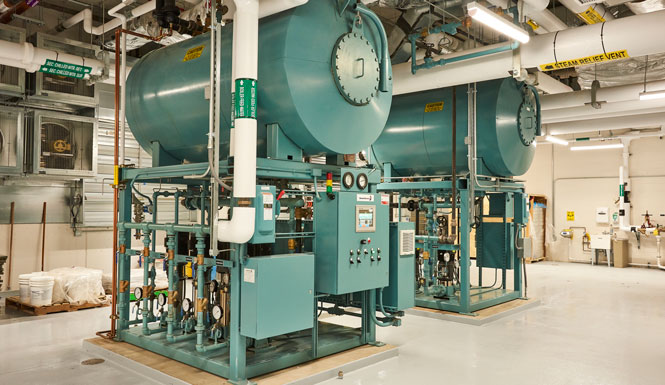 Boilers are often the forgotten heroes in the processing or manufacturing plant operation, consistently delivering steam power which drives machines, and/or providing heat for molding, curing, sterilizing, comfort, etc.  It is only when the intended purpose stops that many in the plant look for the cause, and it may be the boiler; failing sometimes because internal corrosion has caused it to leak excessively. 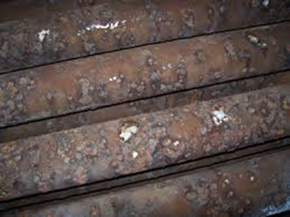 The cause of this corrosion is most often unscavanged oxygen in the boiler water which is most damaging in the presence of heat as it forms blisters (Fig. #1) under which a hole burrows through the metal, breaking the seal between the boiler water and internal hot surface behind it.  This leaking means additional oxygen laden raw makeup water enters the boiler furthering the corrosion while in many cases the leaking boiler water falls or sprays on the insulating refractories causing them to fail too. 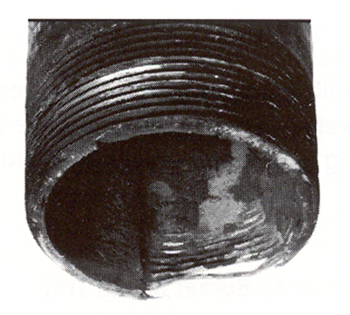 To combat these corrosive gasses, a water treatment consultant will recommend sulfite treatment to mitigate the oxygen corrosion and administer this into the boiler’s feed water tank.  For carbonic acid control, filming or neutralizing amines are employed, and injected into the boiler’s steam supply piping. If properly managed and controlled, these remedies work, but they are expensive and in the case of the sulfite use, this adds to the boiler’s continuous blowdown requirement, adding to the boiler’s fuel cost.

Deaerators to the Rescue 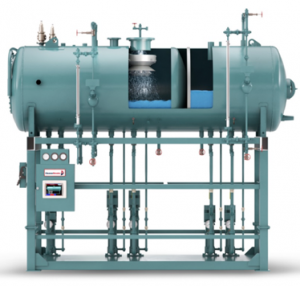 Deaerators are boiler feedwater systems that are designed specifically for removing the majority of these corrosive gasses before entering the boiler or steam system, and there are three (3) specific types, The Spray-, Column- and the Tray-type (See Fig. #3).

Starting with the Spray-type deaerator as seen in (Fig. #4), you can see where the design gets its name based on the spray cone assembly located in the tank itself which is where the deaeration is taking place with this particular type. You’ll see these are complete packages including the feedwater tank, the stand, the pumps, and all the controls needed to properly function. 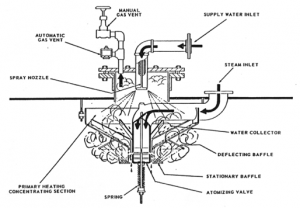 Now for a closer look at the business end of the Spray deaerator, we see (Fig.#5) a cross-section of the actual spray cone assembly which is the device that reduces the surface tension of the water by spraying the influent as it comes in contact with the steam entering at the same point.

It is in this cone section where the water is raised in temperature to within 2 – 3 degrees of saturation, and in so doing, driving off much of the O2  & CO2  through the vent.  As this steam condenses and combines with the hot feedwater influent, it collects in the cone and is pushed through the spring-loaded spray nozzle which is also seeing live steam; agitating and misting the mix while heating the water to saturation (227 degrees in the case of 5# operation) thereby finishing the deaeration of the liquid before it collects into the integral feed tank.  The remaining steam, after the final stage, is condensed, leaving only the remaining O2  & CO2  to exit the vent.

The next type to consider is the Packed Column (Fig. #3) which unlike the Spray type, has two separate vessels, one for deaerating (the column), and one for holding the deaerated feedwater (storage tank).  And similar to the Spray, it’s also equipped as a complete package with stand, pumps and controls.

It’s obvious how the Packed Column got its name with the deaerating column positioned on top of the tank, packed with rings, normally of stainless steel, providing the medium for lessening surface tension of the water while also providing an excellent means of co-mingling the water with the steam for outstanding counter flow heat transfer and heating; after which the corrosive gasses (O2  & CO2 ) release to the atmosphere.

Operationally, the makeup water and/or condensate enters at the top and the steam enters at the bottom through the top of the tank and into the bottom of the column.  At the top of the column, you also find the spray assembly and the vent condensing chamber. It is in this general area where much of the feedwater is deaerated coming within a couple degrees of saturation.  The feedwater then continues to drop downward cascading over the rings, staying in close contact with the steam as it heats the water to saturation temperature in an agitated counter flow direction.  Then releasing the non-condensible gasses (O2  & CO2 ) to atmosphere through the top vent indicated in the picture.

The Tray–type deaerator (Fig. #3), can get quite large, not only in capacity but physical size as well.  You’ll find many of this type of deaerator associated with and supporting large industrial watertube boilers, 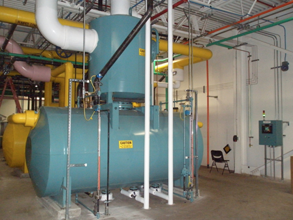 As far as operation is concerned and as seen in (Fig. #6), the Tray deaerator works very much like the Column type; however, rather than rings being used to reduce the water’s surface tension while providing an effective heat transfer medium, Sstl trays are used.  And similar to the other designs, the Tray deaerator includes the spray nozzle for injecting the feed water into the unit.  It includes the steam injection point, the vent condenser, the downcomer or path for the deaerated water to flow into the feed tank, and a tapping for high-temperature returns to be introduced into the deaerating tank to assist in the deaerating process while also saving energy due to capturing preheated and chemically treated condensate.

These three deaerator types all deliver a boiler feed water which reduces the oxygen to less than 7 ppb or 0.005 CC/liter, and a significant amount of the CO2  depending on the concentrations of sodium carbonate or bicarbonate.  This substantially increases boiler and system reliability while saving energy and reducing chemical costs.

Now that we’ve covered the why and how deaerators apply, our next article Keeping Deaerators Effective and Reliable, it discusses the proper monitoring of a deaerator, its maintenance requirements, and what to do if it goes down and your process needs to continue.